Are You Up For A Fight? 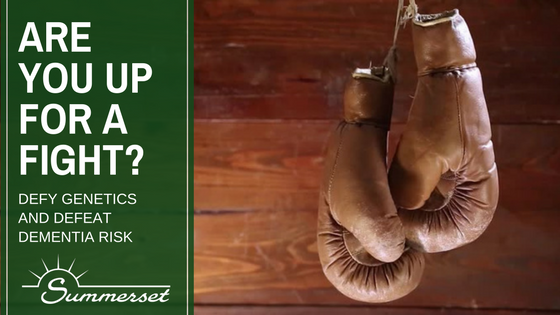 Are You Up For A Fight?

In our last blog Dementia Risk and Race, we discussed groundbreaking research that revealed how race impacts a person’s risk of developing dementia in their lifetime. Results showed that of all ethnic groups studied, African-Americans had the highest risk (38%) of being diagnosed with dementia after age 65. In our opinion, it’s time to defy the odds of dementia risk for African-Americans. But, how? We needed to find out why African-American men and women have a higher risk of late-onset dementia. This question is important because our elderly population, those 65 years and older, is growing at a rapid pace. And, because the disease is strongly related to age, researchers estimate that the number of people with dementia is expected to increase significantly in the coming decades. When you consider the African-American population age 65 and over, this group’s incidence of dementia will increase when the group’s population more than doubles to 6.9 million by 2030 (alz.org). In order to properly prepare for this growing population, it’s critical to understand risk factors and how we can defeat them. For African-Americans, does it come down to age or are there other factors like genetics and environment? 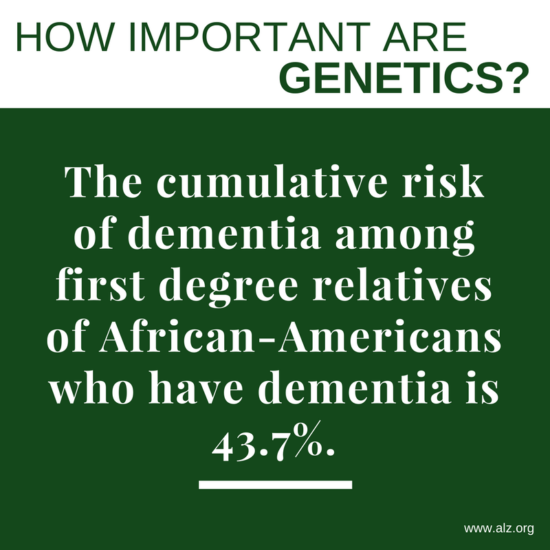 A person’s lifestyle has a noticeable impact on the likelihood of developing different conditions that correlate with dementia. Heart disease, hypertension, diabetes and high cholesterol can influence the risk of developing brain disease. Did you know that between the ages of 45 and 64, African American men have a 70% higher risk and Black women have a 50% greater risk of developing heart failure than Caucasian men and women? Even though African-Americans are more prone to developing forms of vascular disease, there are strategies for fighting dementia.

While genetics are out of our control, our daily decisions are not. Many doctors and researchers believe that by fighting vascular disease, we can fight the onset of dementia. A more active lifestyle and a healthier diet can all play an impactful role in preserving brain health.  Limiting refined sugars, processed foods, saturated fats, and sodium intake are all steps in the right direction. By limiting these foods, you can prevent the buildup of toxins that can lead to inflammation which can result in impaired cognitive function. Consuming healthy fats, fresh fruits, vegetables and lean meats are known to help reduce the risk of disease.

At Summerset Assisted Living Community, our nutritionists and nursing staff follow careful dietary and activity guidelines that keep our residents healthy and strong…strong enough to fight hereditary and environmental risks associated with both heart and brain disease. Learn more about our structured programs and our Memory Lane special care program that makes Summerset a resident’s home away from home. Follow us on social media and sign-up for our blog to stay up to date.

Your Home Away from Home | Located in Atlanta, Georgia, Summerset Assisted Living Community is focused on providing top quality, excellent, compassionate care for those we serve. Schedule a tour today!